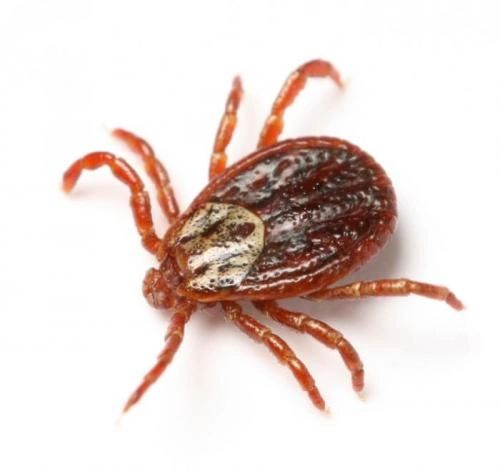 Female ticks typically lay their eggs in the spring after completing their two year life span. In fact, their life purpose is to reproduce and by feeding throughout each life stage, they’re gaining the strength they need to mate and do so. Because a tick needs to completely detach from its host before beginning the reproduction process, ticks aren’t physically able to lay eggs directly on a host. But, they’ll lay eggs just about anywhere else; ticks have been found to lay eggs in coat linings, carpeting, furniture, outdoor leaf brush, and other warm, soft places inside or outside.

Even though a tick is no more than 2mm in size, one tick can lay thousands of eggs. But don’t worry, tick eggs are actually easier to spot than ticks themselves, and they aren’t infectious at this stage. The eggs are often brown and red in color and appear to be translucent. If you find a batch of tick eggs, you can use salt as a natural product to begin drying them out, but it’s best to call an exterminator to identify an appropriate pesticide product or plan of action. It’s always better to be safe than sorry.

Later in the summer, tick eggs hatch into larvae. Once they reach this life stage, the thousands of tiny larvae that were once eggs are ready and waiting for their first host to pass by. A tick needs to feed on the blood of a host during each life stage in order to pass onto the next. Larvae are not infectious at their time of hatching. However at this stage, they seek smaller mammals as their first host, and one of the most common mammals they feed on is the white-footed mouse.

These mice are efficient transmitters of Lyme disease. If a tick is able to find and feed on a mammal who carries the disease like the white-footed mouse, the disease is then transmitted to the tick. They can become carriers of Lyme when they suck the blood of an already infected mammal who was previously exposed to the Lyme disease causing bacteria, Borrelia burgdoferi.

Larvae growth peeks in August. When they are done feeding on a host and are full of blood, Larvae fall to the ground and begin transitioning to their next life stage as nymphs.

Ticks become nymphs between the fall and spring. However, because ticks are inactive when temperatures drop below 45 degrees Fahrenheit, it’s less likely to get a tick bite during winter months. Typically they’ll nest on a host without feeding, or sit dormant in leaf litter not seeking a host to feed on. Despite that, if you and your family venture out hiking on an unusually warm day, it's still important to perform tick checks before returning indoors.

Ticks, at the nymph stage, become the biggest concern during the spring as they begin to search for their next host when the warmer weather breaks. During the months of May, June, and July, nymphs will crawl up tall blades of grass and brush to reach their host.

Dogs aren’t a tick’s first choice as a host, but your pets become an easy substitute when they can’t come in contact with their primary choice, a deer.

Once the nymph is saturated with blood, it will fall off of its host and come to its adult life stage during the fall. Once again, at the adult stage, the tick will look for its third and final host for feeding.

There are actually more than two thousand different species.  The fleas start as eggs, then turns into pupae, followed by larvae, and lastly they reach the adult flea stage.

The second stage is the larval stage

This is actually 3 stages within one. The flea larvae pupate and weave cocoons, as long as they are given enough food. They have small hairs on their body and are usually ¼” or 6.35 mm long and partly transparent. They move around and eat the feces, but it’s mostly just dried blood) of the adult fleas. After 5 to 20 days they create cocoons of silk and pupate.

Third stage in the life cycle of fleas: The pupal stage

The fleas are one step closer to adulthood. It’s a matter of days or up to a year before they choose to emerge from the cocoon. Temperature and humidity are some of the things that determine how fast that happens.

Fourth and last stage is when the adult flea is born

They only have about a week to find some blood, if they want to survive. After that they can survive for several years without food. They have to feed though if they want to be capable of reproducing. Adult fleas get to their target by jumping. They have 3 pairs of legs and the ones on the back are designed to jump extremely high.  If the adult fleas live under perfect conditions,  ten female fleas can produce over a quarter of a million fleas in a month. If it gets out of hand like this, call us for help.