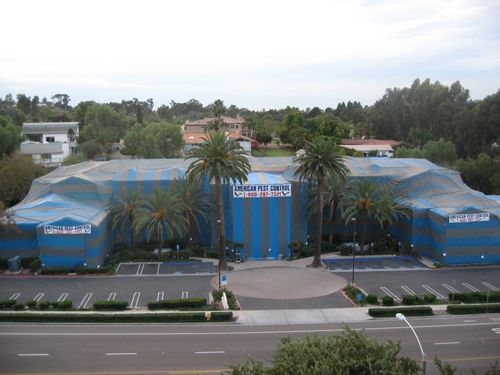 Fumigation generally involves the following phases: First the area intended to be fumigated is usually covered to create a sealed environment; next the fumigant is released into the space to be fumigated; then, the space is held for a set period while the fumigant gas percolates through the space and acts on and kills any infestation in the product, next the space is ventilated so that the poisonous gases are allowed to escape from the space, and render it safe for humans to enter. If successful, the fumigated area is now safe and pest free.

Structural fumigation techniques differ from building to building, but in houses a rubber (usually the tent is made of plastic\pvc coated canvas material) tent(s) are often placed over the entire house while the pesticides are being released into the vacant residence. This process is called tent fumigation or "tenting". The sealed tent concentrates the poisonous gases and prevents them from escaping into the neighborhood. The process can take up to a week depending on the fumigant used, which is in turn dependent on the temperature and the pest.